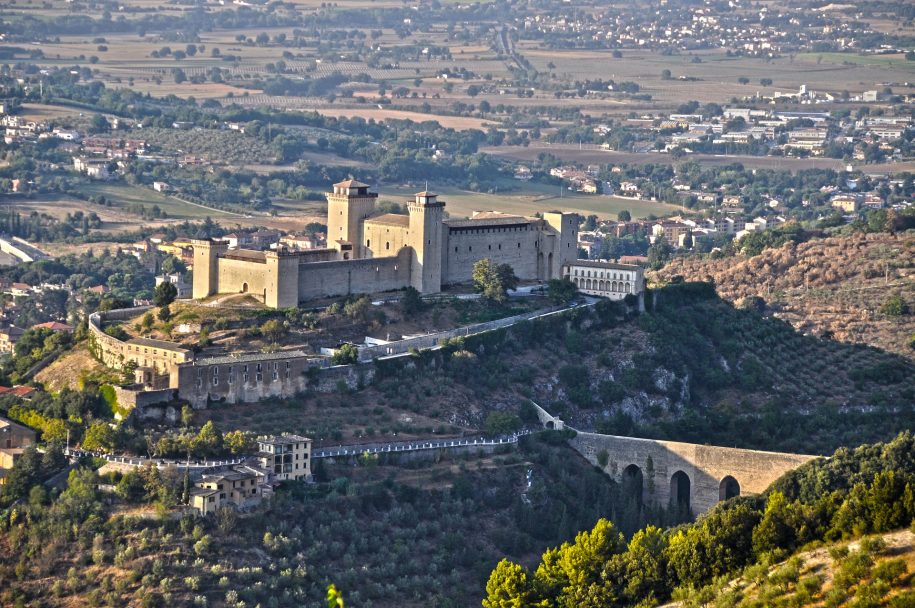 A visit to Spoleto will make you fall in love with this hidden treasure of Umbria, located in the foot of the Apennine and surrounded by woods, water and hills. The town will leave you breathless thanks to its rich heritage in history and art. Visiting its historic centre will be a beautiful experience.

Spoleto has its origins in the XII century before Christ due to the settlements located here. Its dominant position, on the hill of Sant’ Elia, meant that a decision was made to fortify the city with limestone walls dating back to the fifth century BC. After becoming a Roman colony, it was passed to the Lombards and then to the Franks. But it was in the Renaissance when Spoleto transformed from being a strategic centre (due to its position) to a cultural centre.

Spoleto is a very walkable town, so get ready to spend most of your time on foot. Even though the town seats on a hill, you won’t get tired by walking around. Luckily there are the escalators that run along the hillside. Among the things not to be missed to see are an imposing fortress, the spectacular Cathedral, The Bridge of Towers (part of an ancient aqueduct), the Roman remains and charming little alleys.

Many people visit the town during the Festival Dei Due Mondi, an international summer festival. The visitors can enjoy operas, concerts, ballets, recitals, plays, along with film festivals, workshops, conferences, meetings, awards, competitions, special events and also contemporary art. Composer Gian Carlo Menotti founded this Festival in 1958. The name of the “Two Worlds” derives from the aim to have the American and European cultures meet each other. 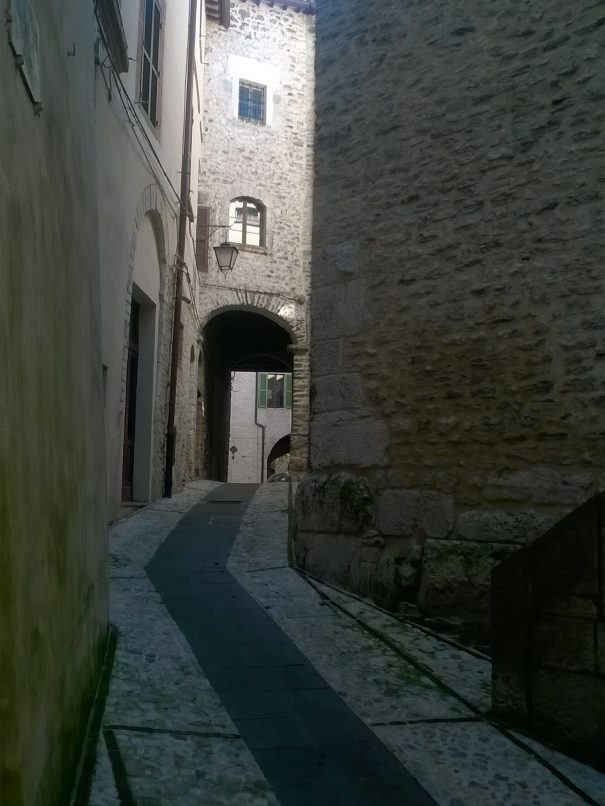 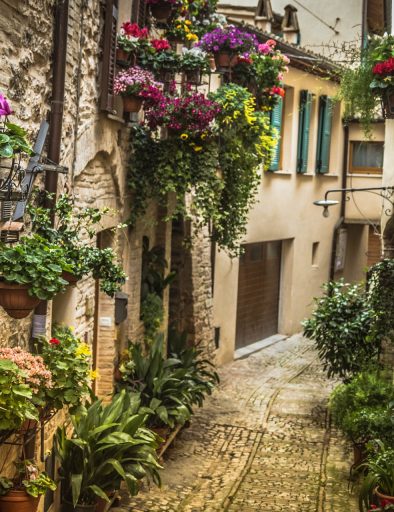 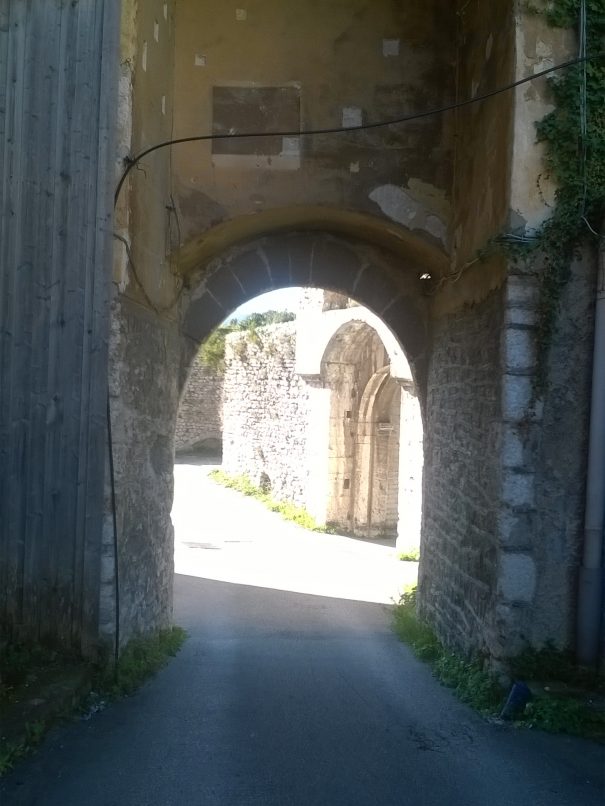 We are starting our visit to Spoleto by heading first to the Roman Theatre, dating back to the 1st century AD. This theatre is a vital testimony left by the Romans in the Umbrian territory and has a diameter of 114.40 meters. Over the centuries, one wing of the theatre was destroyed and then incorporated into adjacent buildings but, thanks to restoration, it is possible to admire a large part of this complex, including the steps.

Next, we arrive in Piazza del Duomo. This square has a particular shape. You will notice a long and wide staircase starting from the central part of the square. Turn around, and you will see the main church of the city. Look up to admire the beautiful Cathedral of Santa Maria Assunta, built in XII on the remains of another church. The Duomo is undoubtedly among the most beautiful monuments in the city. It is also one of the most significant religious places in town. The Cathedral is dedicated to Santa Maria Assunta and constructed in a typically Romanesque style.

The external facade of the Cathedral has a typical hut shape built-in light stone. Its upper part is the oldest and in Romanesque style and divides into two horizontal bands. The interiors are in Baroque style, characterised by a Latin cross plan, divided into three naves. 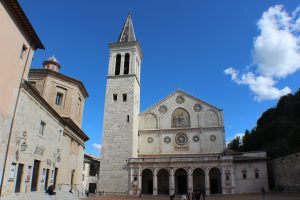 Close to the Cathedral you will find Rocca Albornoziana, among the most important places to visit in Spoleto. It is a fortification built in the 14th century. You will immediately notice six large towers and a beautiful courtyard inside the complex.

This fortress was commissioned by Pope Innocent VI as a structure to strengthen the power of the church in the territories of central Italy. This structure is part of a system of fortifications and was erected on the occasion of reinstating Rome as papal seat. Back in time on the ground floor there were located the service rooms like the kitchens, laboratories and offices for officials. In contrast, on the upper level, there were the residences of the governors and distinguished people.  Nowadays you can visit various rooms included: the Courtyard of Honour, the Courtyard of Arms, the Hall of Honour, the Rock and the Pinta Room. Worth mentioning is the beautiful frescoes that decorate the Hall of Honor and the Pinta Room. The fortress also houses a National Museum of the Duchy of Spoleto, where you will find many treasures dating back to the Renaissance.

Just a 3 min walk from the fortress you will find the Bridge of the Towers (Ponte delle Torri) – a symbol of Spoleto. It joins the Rocca and Monteluco. This bridge is impressive and unique: 230 meters long and 82 meters high. It is supported by ten arches that go deep to the ground and some of which have a second arch at a lower level to support the structure. The Ponte delle Torri was part of a Roman aqueduct and currently crosses the Tessino stream. On the other side, there is a second small fortress, called Fortilizio Dei Mulini which was built to monitor the bridge and was also used as a mill. 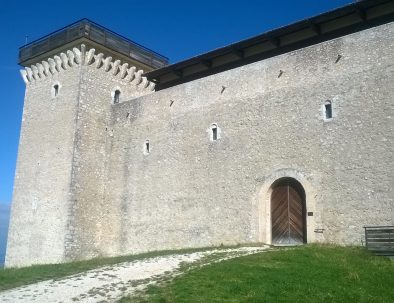 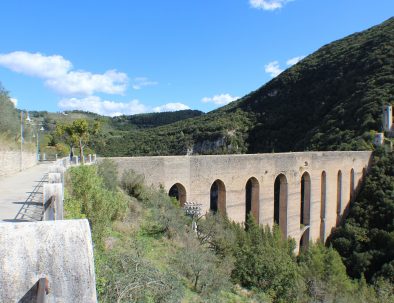 Spoleto has many churches, and you should visit some of them. Let’s look at Church of San Ansano – you can find it on via Brignone. The church constructed in the early Christian era inside an existing Roman temple and only later became a crypt. It was completely rebuilt at the end of the 18th century Inside it holds works of art from previous eras, up to the seventeenth century. The church is quite small, and the access portal is closed between four high bright columns. The interiors have a single nave, but five different altars. It is possible to enter the crypt of Sant’ Isacco, dedicated to the Syrian monk who came to the city in the early sixth century. The tomb is divided into three naves closed by cross vaults and has numerous frescoes created between the eleventh and twelfth centuries.

An unusual sight of Spoleto is the Arch of Drusus and Germanicus: a Roman arch built-in 23 after Christ, located in the historic centre. The dome is built in limestone cut into square blocks. The decorations of the structure are minimal, only the outer edges have pilasters and Corinthian capitals, and the interior of the arch has smooth columns and other Corinthian capitals.

Another church that you should stop by is Church of San Gregorio Maggiore, built in the 11th century in Romanesque style, that was recently restored. The façade shows off a 16th-century porch and a 14th-century chapel that is also part of the complex. The massive campanile, built in the 15th century, is one of the main features of the building. Inside you will find a single nave with beautiful pillars and columns, a must-see for all those stopping in Spoleto.

Finally, we need to mention Basilica of San Salvatore – the oldest church in Spoleto. Unfortunately, it is not accessible due to the damage done by the earthquake. However, it is still open and visible from the outside. The church of San Salvatore brought UNESCO recognition to Spoleto in 2011, and it’s recorded on the listing of world heritage sites for the series “Lombards in Italy: places of power”. This space formerly occupied a Roman villa and housed the remains of San Concordio. Between the 4th and 5th centuries, it was replaced by a basilica dedicated to this saint. Later in 814, it was restored again this time by the Lombards with the current church of San Salvatore. 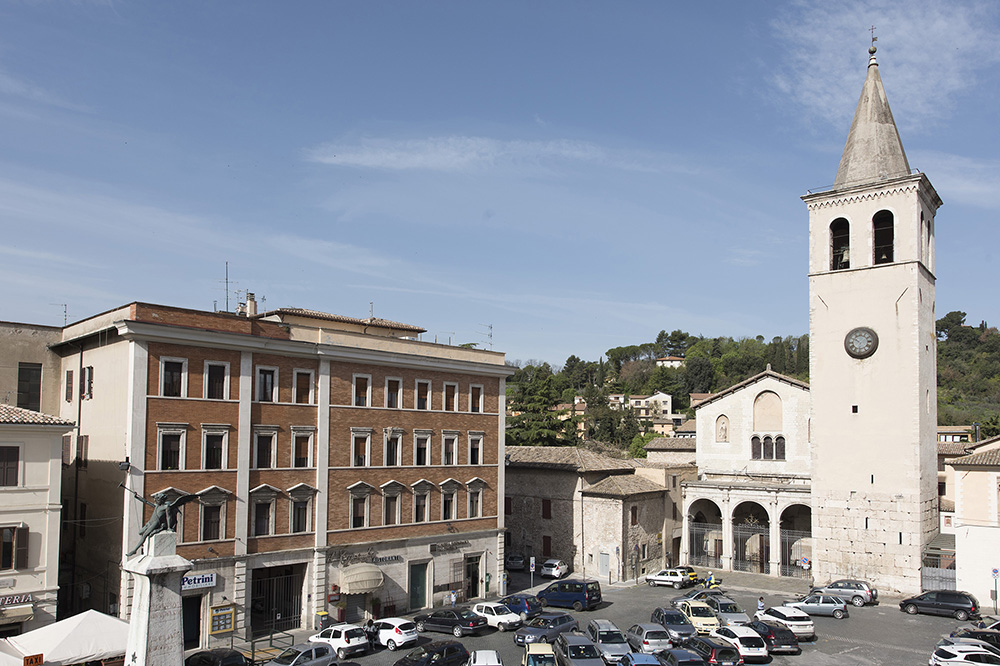 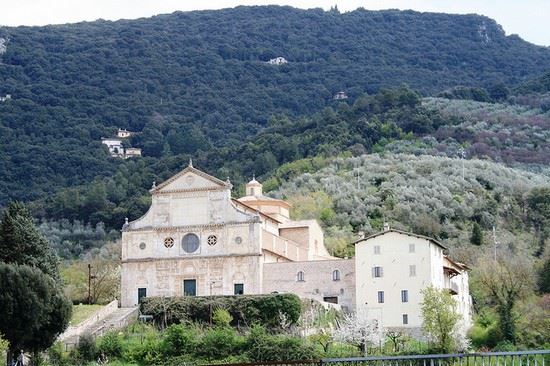 For nature lovers, we recommend a particular spot just outside of the city. Valnerina, is a beautiful area which runs along the Nera river. Perfect for outdoor activities and hiking. The area is full of the natural beauty that Umbria is famous for. Explore Marmore’s Fall, small villages and cultural attractions like the St. Benedict’s Basilica in Norcia, St. Rita in Cascia – basilica and monastery, Vallo di Nera village and many more. 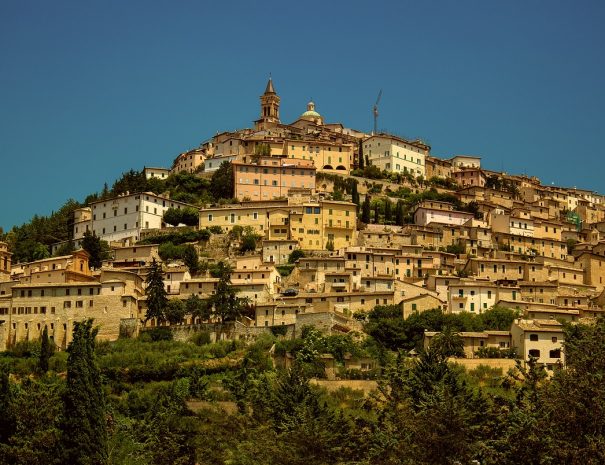 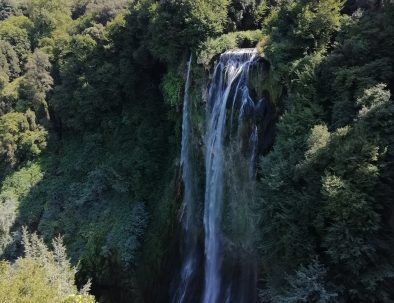 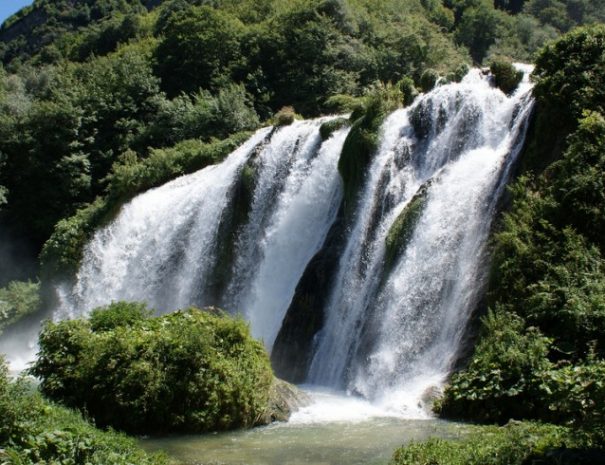 Ultimately let us introduce the culinary traditions in Spoleto, that has a focus on authenticity and high-quality local products: like Umbrian olive oil with and black truffle of Spoleto.

Especially we want to highlight the black truffle which is the undisputed crucial ingredient of Spoleto cuisine, and it is added to many dishes, so do not miss out on trying it.

Truffle in Umbria is known as “the King of the Table” and the ‘Black Diamond of the Kitchen’, as it is a real delicacy. Truffles are technically a form of fungus, meaning that they commonly grow in the wild in a similar way to mushrooms.  They are considered one of the most expensive and delicious foods in the world. There are many varieties of truffles and Umbria, thanks to its geography, this region is very rich in them. The black truffle of Umbria ( Tuber Melanosporum Vittadini) is a common variety of the area and is known as the Norcia and Spoleto Truffle. 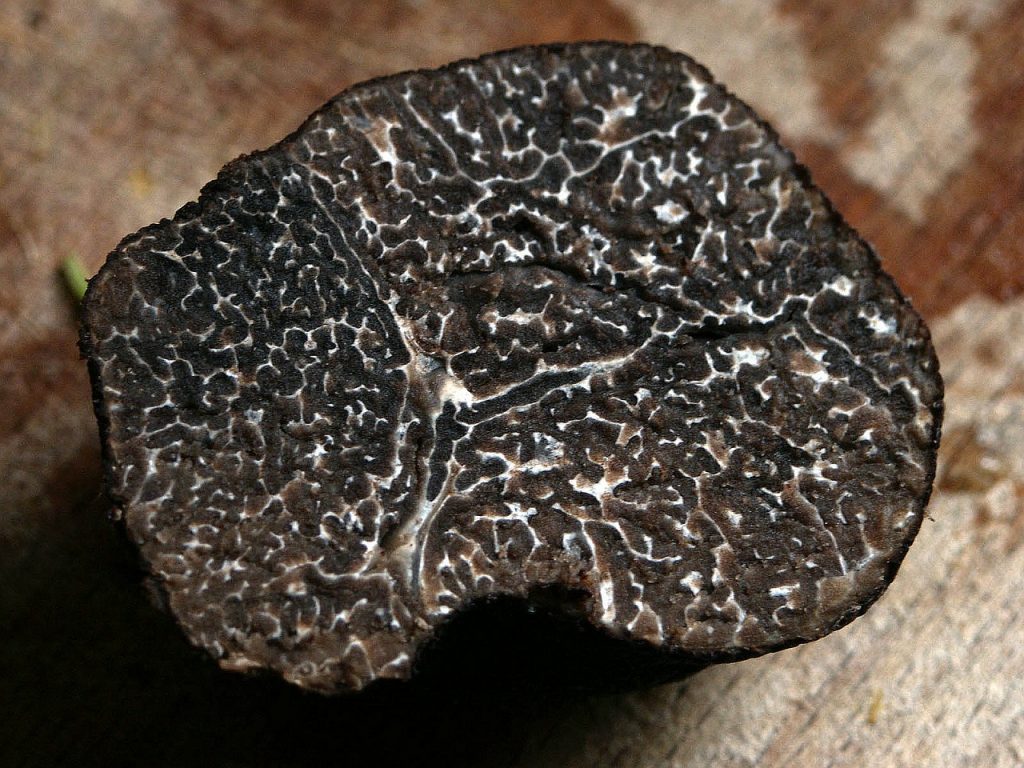 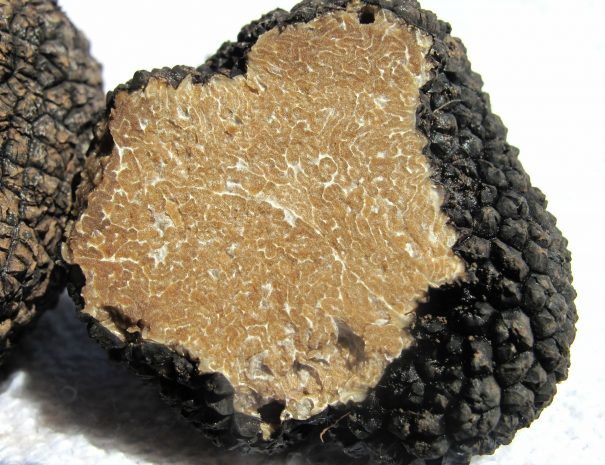 Now let’s go back to the subject of local cuisine. Among the Umbrian dishes, we recommend you trying The “Strangozzi” (homemade pasta), grilled meats and roasts of pork or chicken and the famous “Crescionda”. It is a typical dessert of the city of Spoleto, consumed during the Carnival celebrations. The main ingredients of this cake are amaretti, dark chocolate and milk.

The Umbrian cuisine is also famous for its wines such as the Sagrantino (red wine of Montefalco) and the Grechetto (best white wine of the area). There is also wine produced in the territory around the city of Spoleto and Foligno obtained from Trebbiano Spoletino. You can find various types of this wine: Spoleto white, Trebbiano, Trebbiano Superiore, Trebbiano Spoleto passito and spumante. 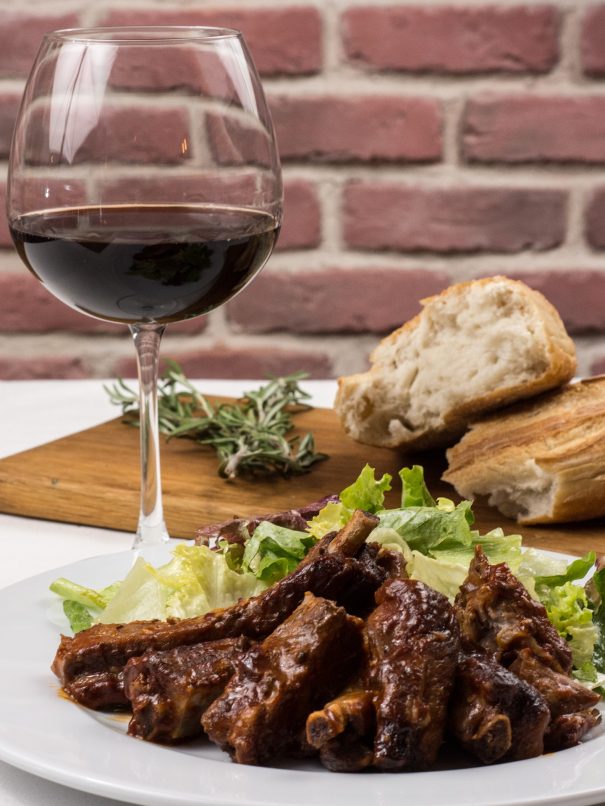 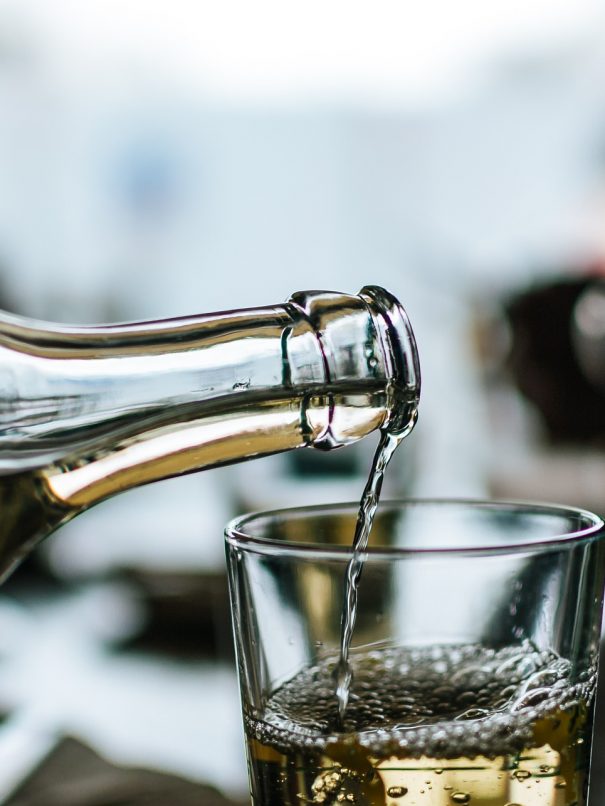 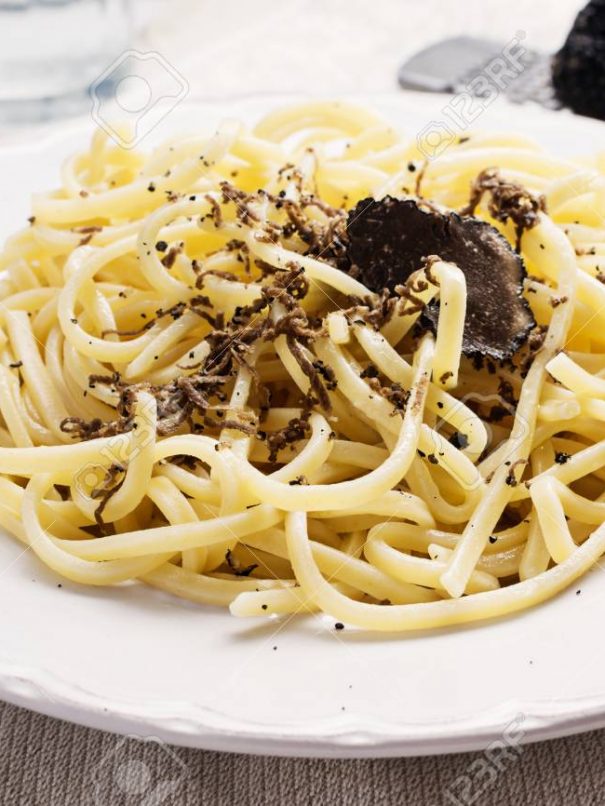 Spoleto has many excellent restaurants where you can find traditional food. Most restaurants in town serve regional dishes along with classic Italian cuisine. We recommend stopping at 9cento restaurant for lunch. This place has a modern design; it’s a bit quirky with interesting stuff hanging around the walls, and the most important is that you can eat genuinely Umbrian delicacies.

If you are coming to Spoleto intending to do some shopping, there are many right places to indulge. You can either shop at the weekly markets, which are more traditional. Or on one of the pedestrian shopping streets. You will find here plenty of stores selling clothes, jewellery, and locally crafted items. Check out terra cotta products and pottery, as you can see in many shops. There are many wine shops where you can purchase suitable varieties of local wines that you can sip later on and bring memorise of the days you spent in Spoleto. 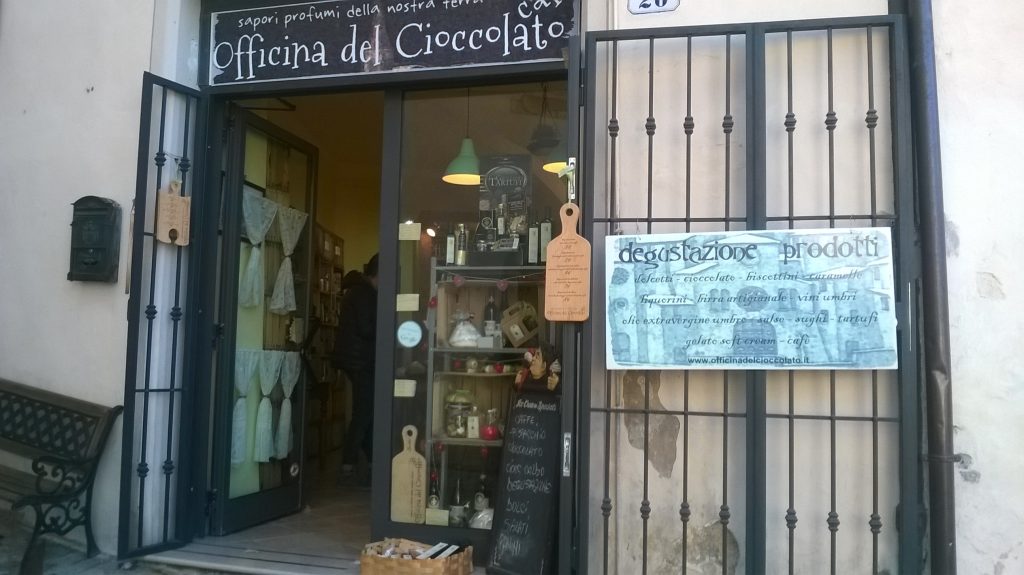 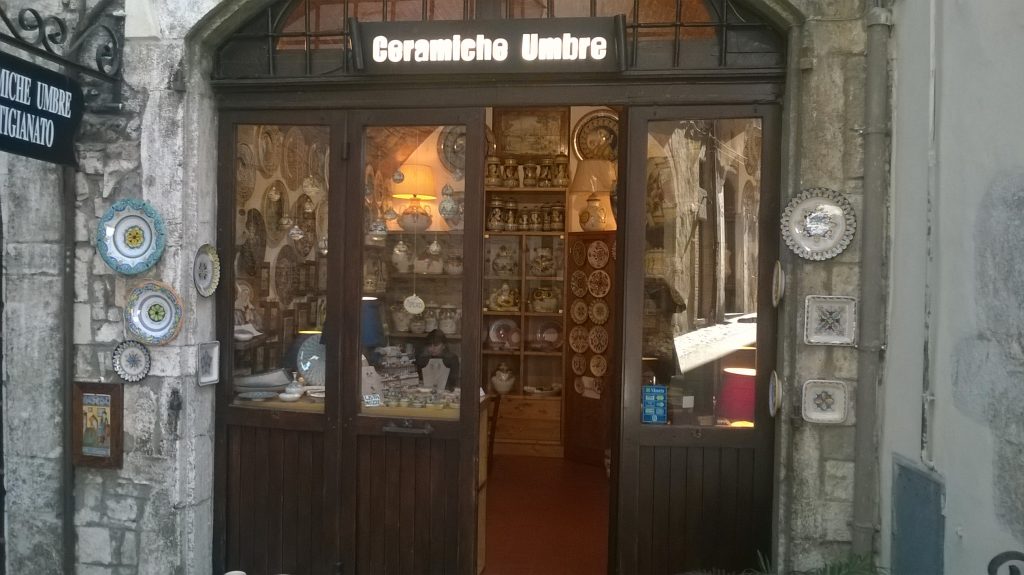 Spoleto is a destination that offers a variety of activates. Everyone will find something interesting to do or see like art, nature, delicious food and wine. So plan your next trip to visit this Umbrian jewel and let us know how you found it.