Our September Walk in Rome 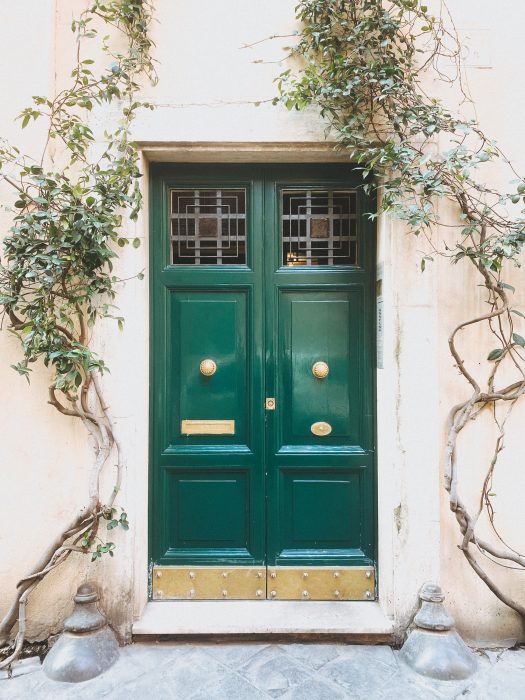 We are back in blogging, and it’s time for our September post. We have chosen to share a fabulous walk we did while in Rome in the first week of September.

The starting point was the Montesacro neighbourhood – we stayed at Best Western Ars Hotel. We had a great breakfast in the hotel, but the best is to head to a local bar if you decide to have a complete Italian experience. There is a great spot called Torrefazione Adriatica F.lli Bertini – a roaster where you can grab a fantastic coffee and some pastry. It’s also great for shopping for sweets and freshly grounded coffee. 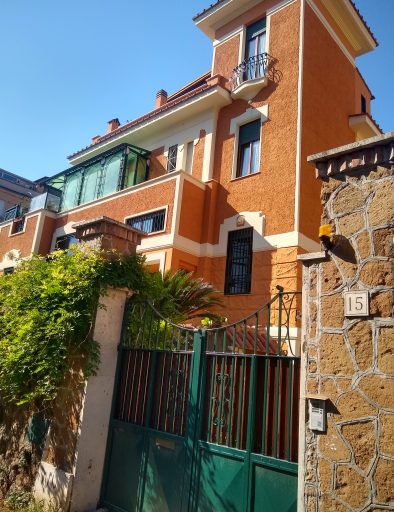 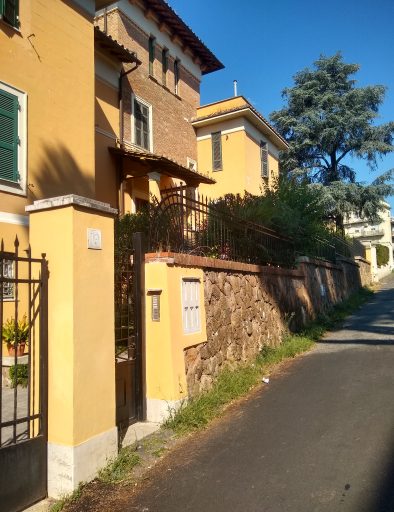 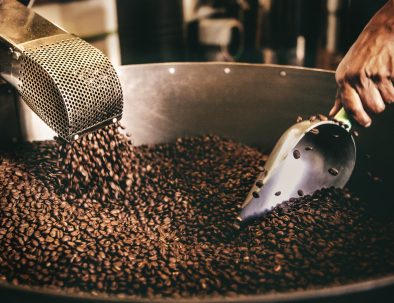 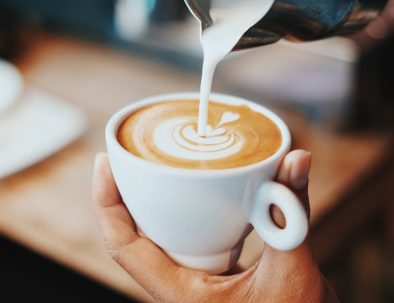 We walked to Piazza Sempione and then towards Via Nomentana in the direction of neighbourhood Trieste. We turned left to Via Tripoli, passing many local businesses and one of our favourite spots in this area – Dolce – a chic contemporary restaurant serving burgers, cocktails, cakes and pastries. Next, we crossed Viale Libia and walked straight to Via Nemorense. If you need to fuel up on a coffee, stop at Don Nino in Viale Eritrea 109 – they have a great selection of pastries and desserts; we love their cheesecake and delizia al limone. If you are in the mood for shopping, this area is excellent as it has many small boutiques and independent shops. 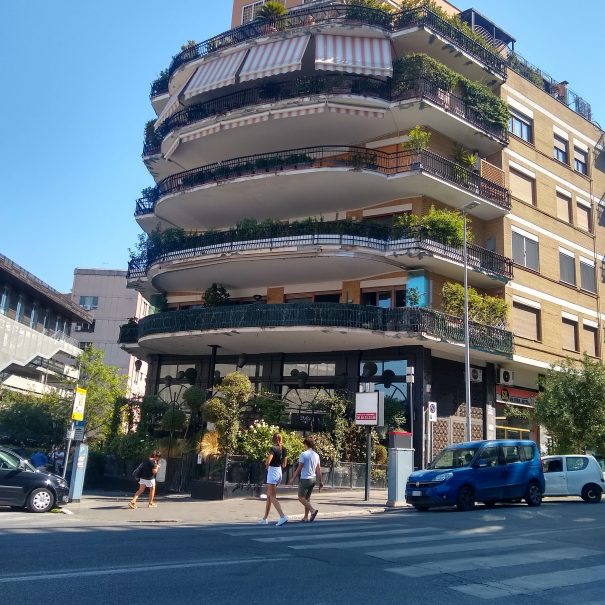 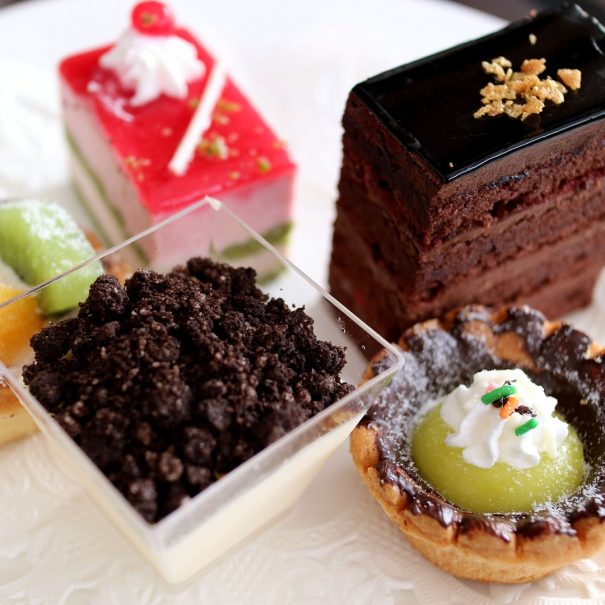 Time to move again, we crossed Via Eritrea and followed Via Nemorense  untill Enoteca Aricioni. Next we turned to Via Crati that continues as Via Nera, passing in the corner Villa Visconti (Vi Salaria 366), named after the owner. Here in 1939 lived Luchino Visconti (an Italian theatre, opera and cinema director, and a screenwriter).

Finally, we arrived to Villa Ada, the second largest park in Rome. It’s an enchanted green area that houses several neoclassical and eclectic buildings. The history of this place is is linked to the Savoy royal family, who owned it from 1872 to 1878 and again from 1904 to 1946. In 1878 the villa was sold to Count Giuseppe Tellfner, who gave the property the name of his wife, Ada. While passing the park, we explored its pine, holm oak, laurel and chestnut woods, and large populated communities of birds. It is an ideal place to spend a sunny day outdoors. We kept walking through the park, passing Tempio di Flora, until the exit on Via Panama. 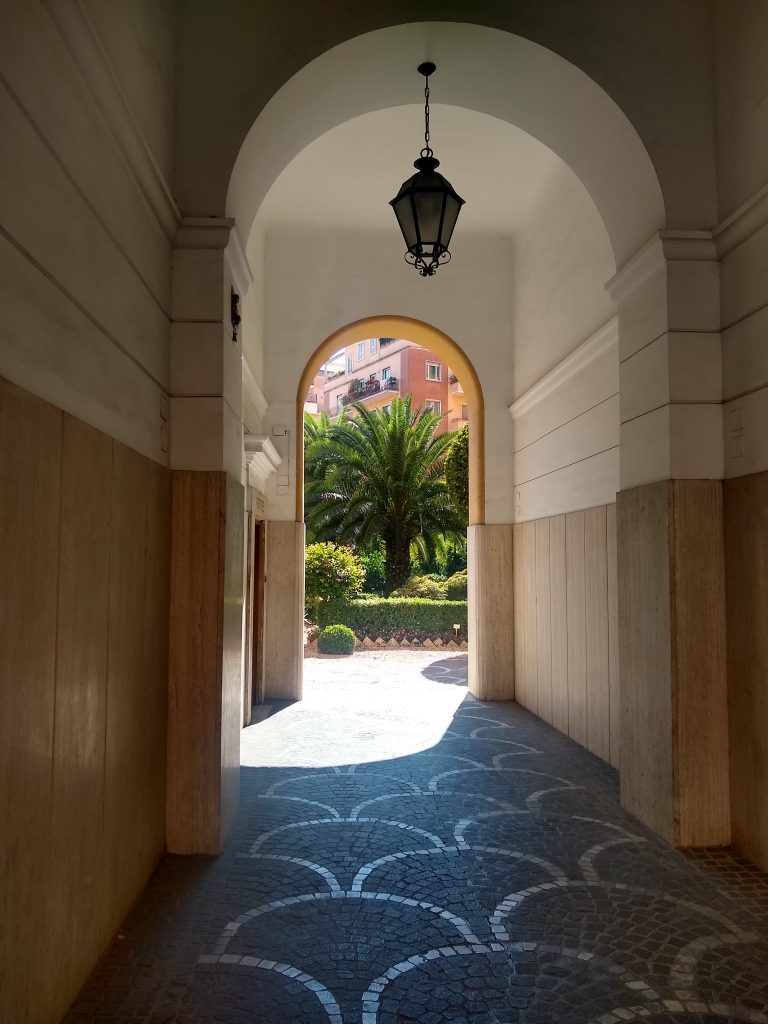 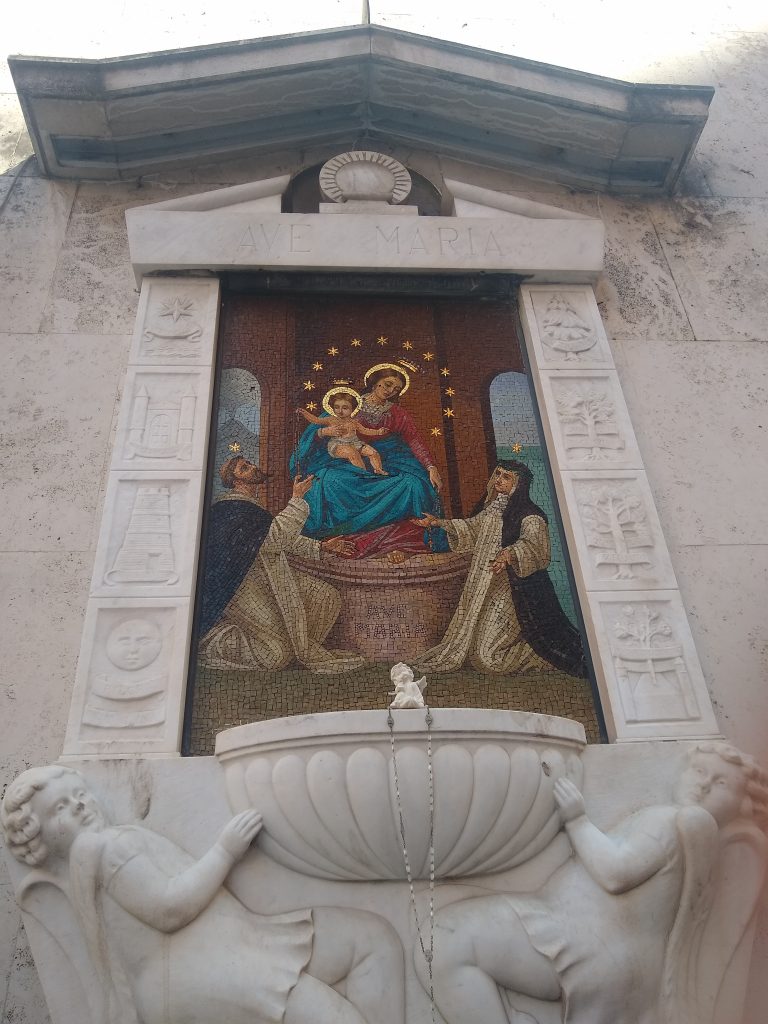 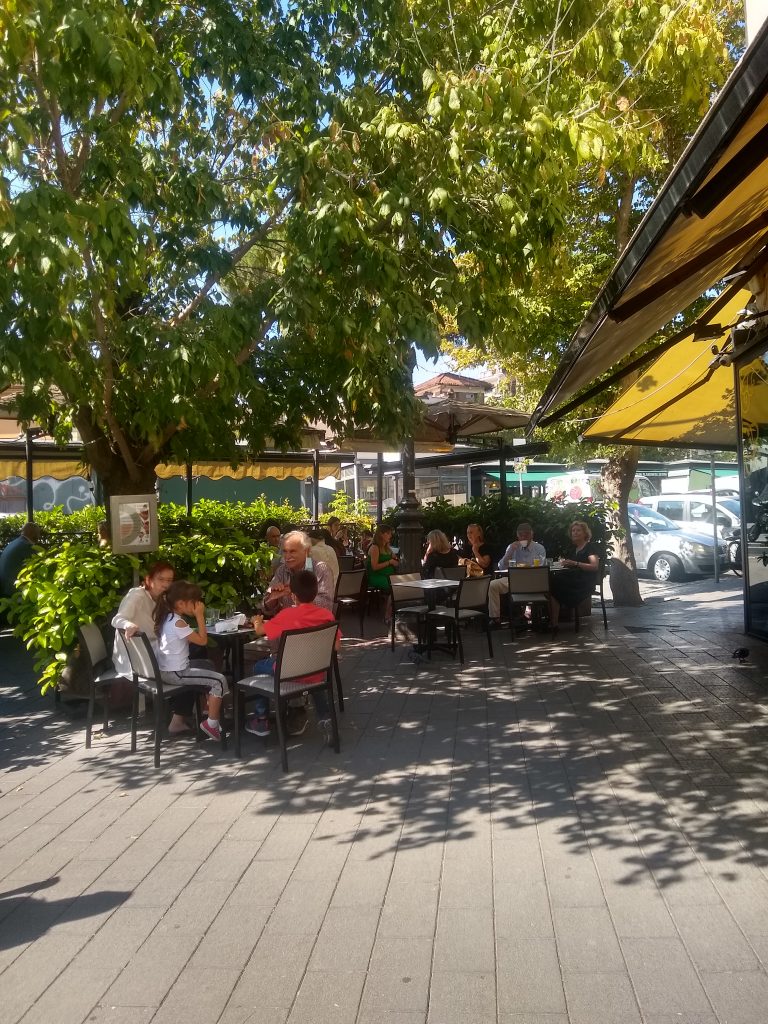 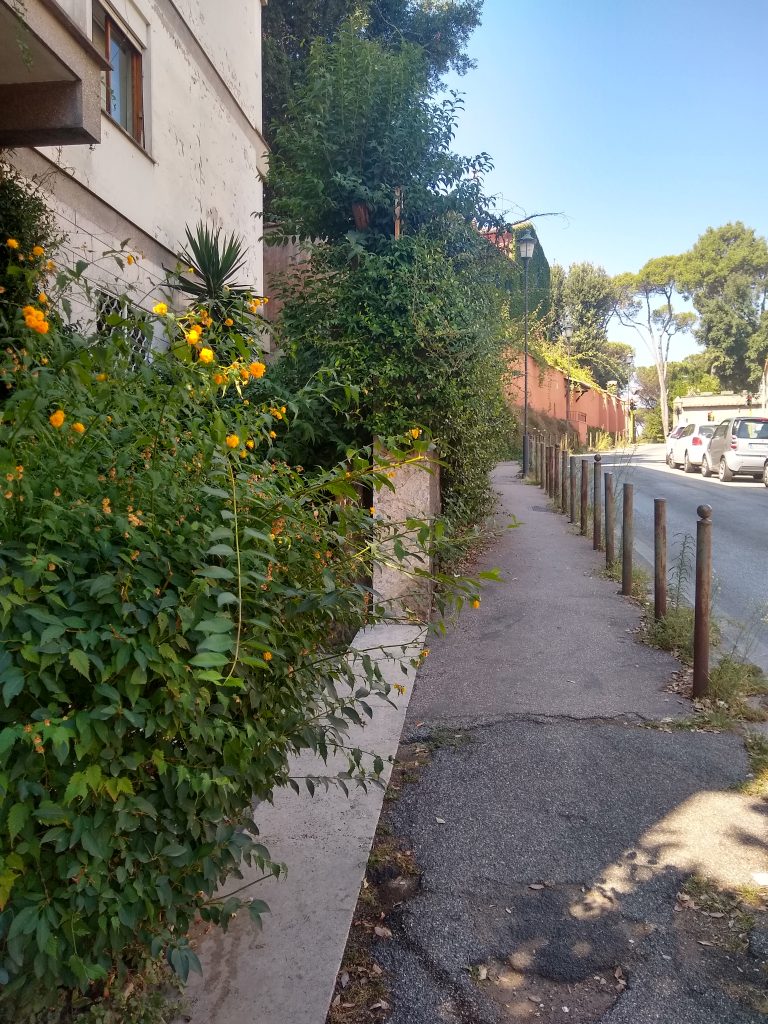 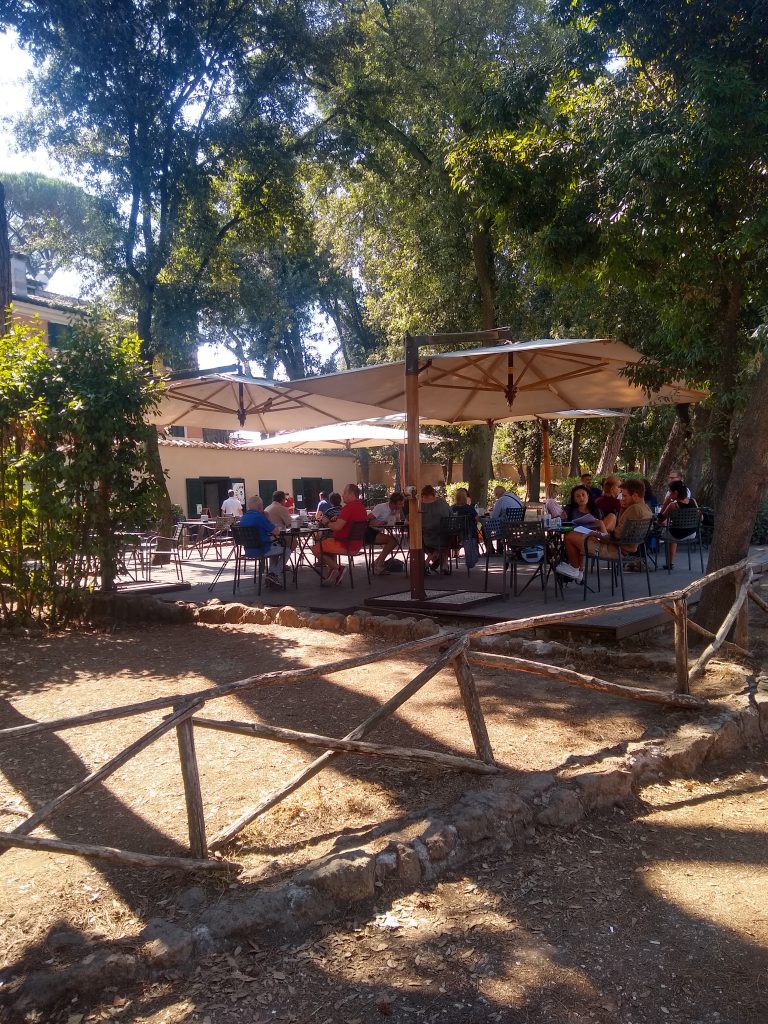 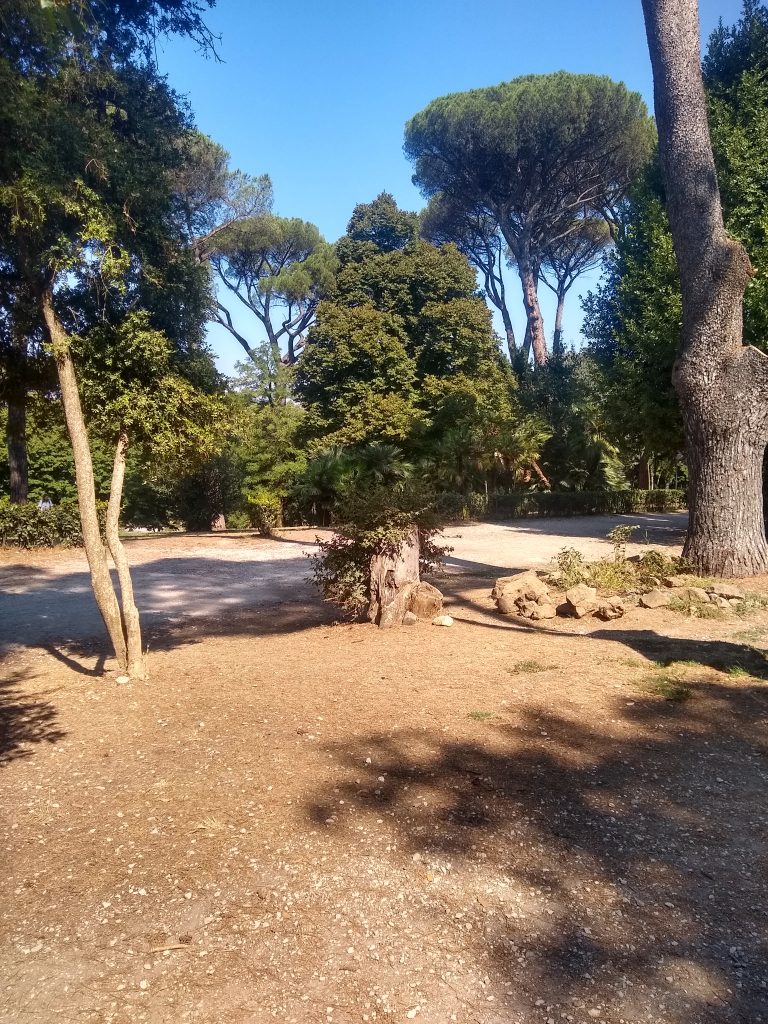 We continued the walk on Via Panama until we reached Piazza Ungheria. On the way, we went past Al Ceppo – an elegant restaurant which serves Mediterranean cuisine reinterpreted with a contemporary twist. It’s a good stop for lovely lunch. After a lunch break, we continued through Viale Dei Parioli and then Via Antonio Stoppani. Then turned to Via Delle 3 Madonne. Another great area to do some shopping or simply admire beautiful palazzi that are homes to embassies.

Then we turned to Via Michele Mercati to see more splendid villas – Embassy of Holland and Embassy of Israel. Just wandering around little streets here and getting lost in their beauty. 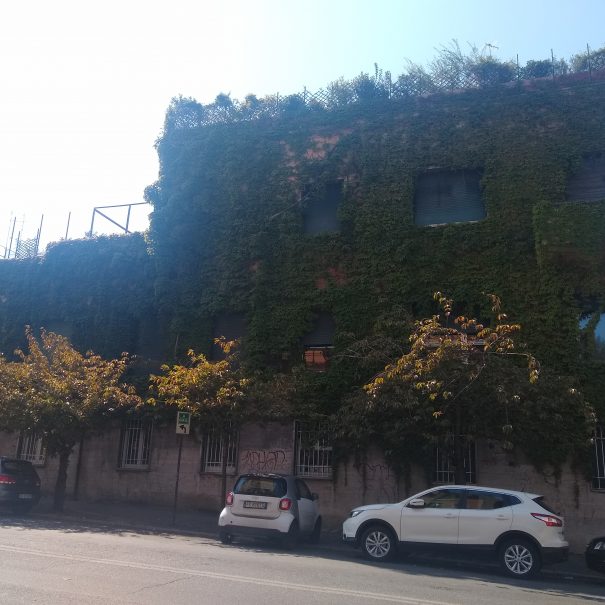 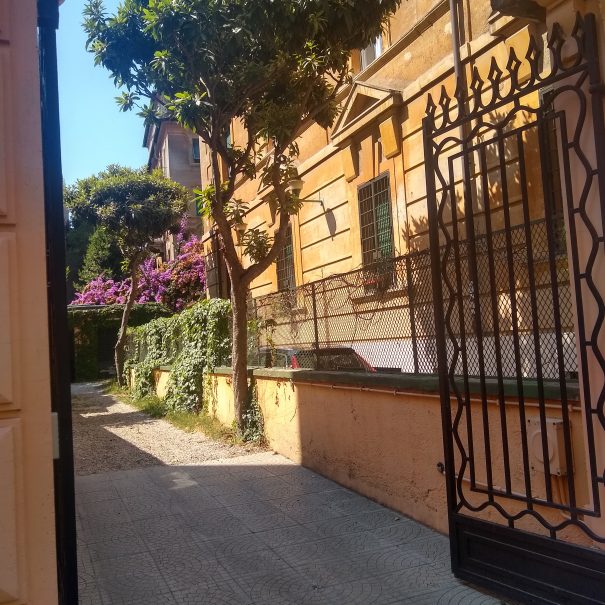 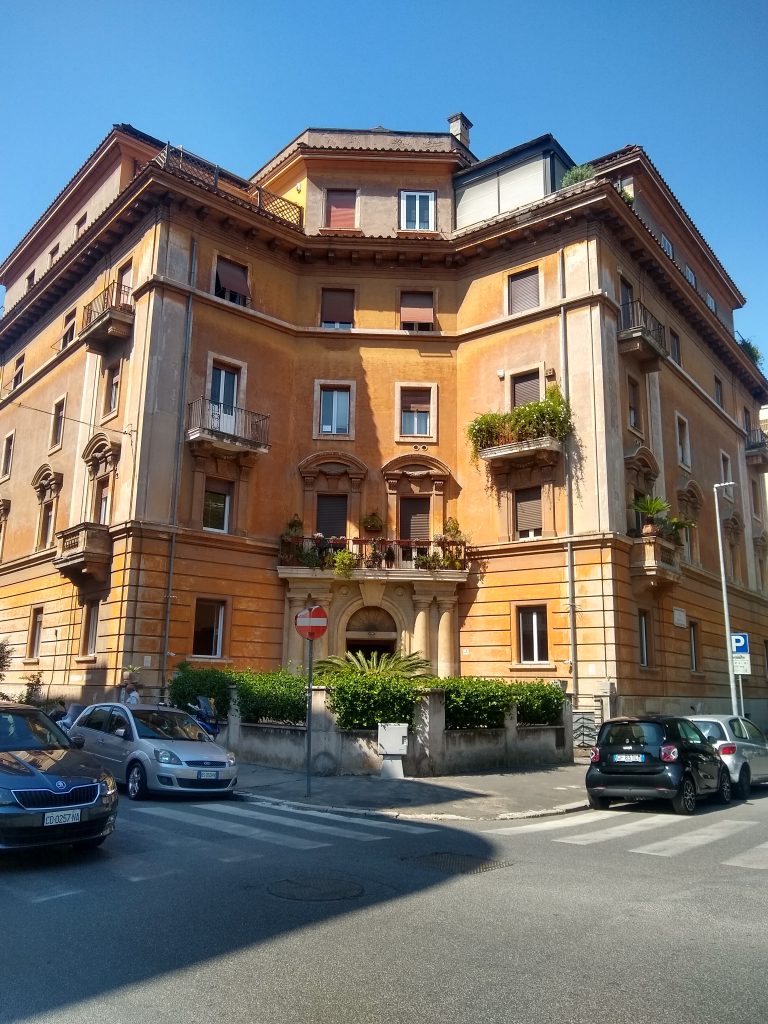 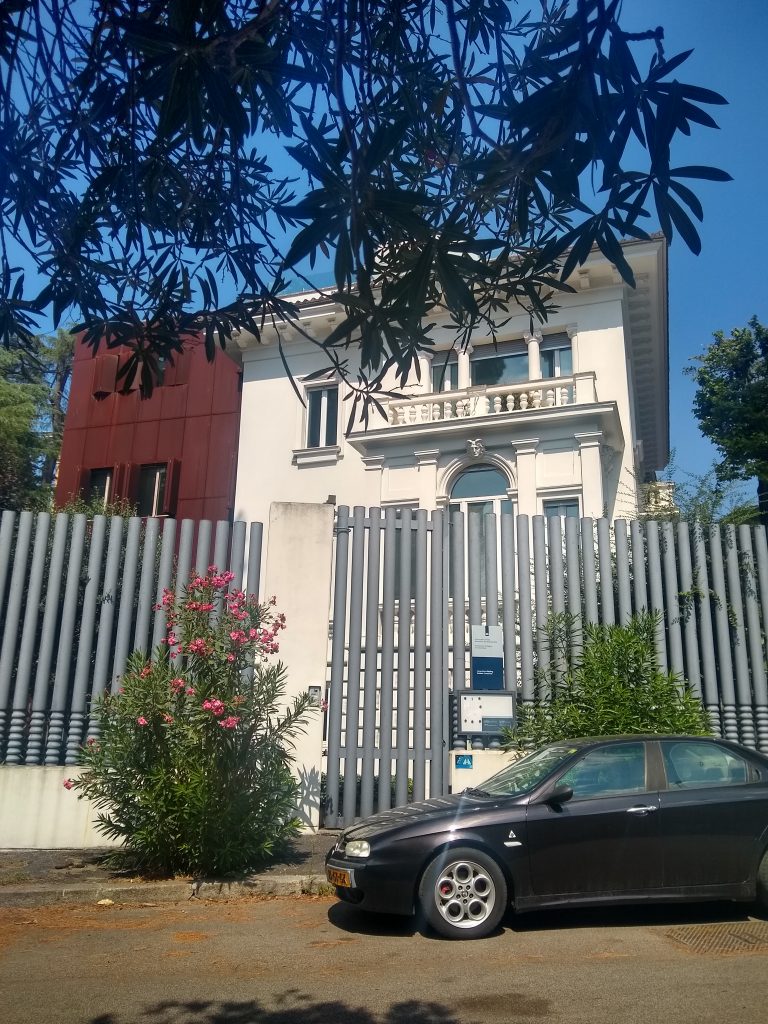 Next we headed towards Villa Borghese and Galleria Nazionale d’Arte Moderna, moving down the street Via Ulisse Aldrovandi. On our left, emerged the stairs up to Villa Borghese, so we climbed up till the top. If you follow this route and need some rest, stop at Satyrus Temporary Bar – a buzzy temporary venue with an artsy vibe. 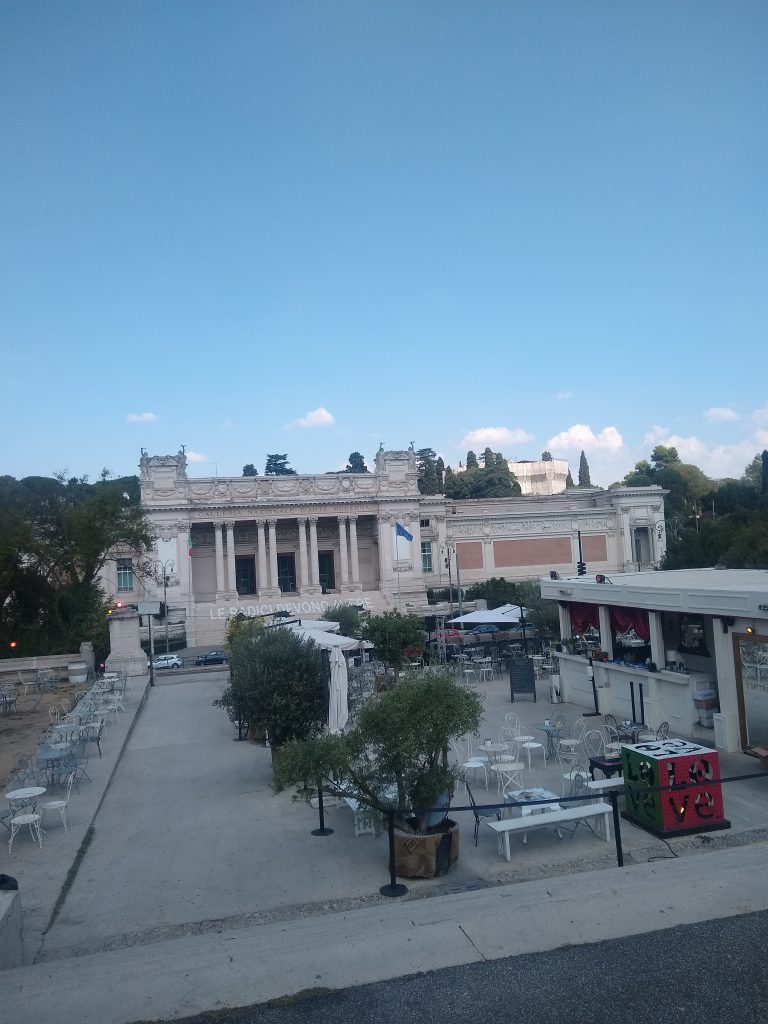 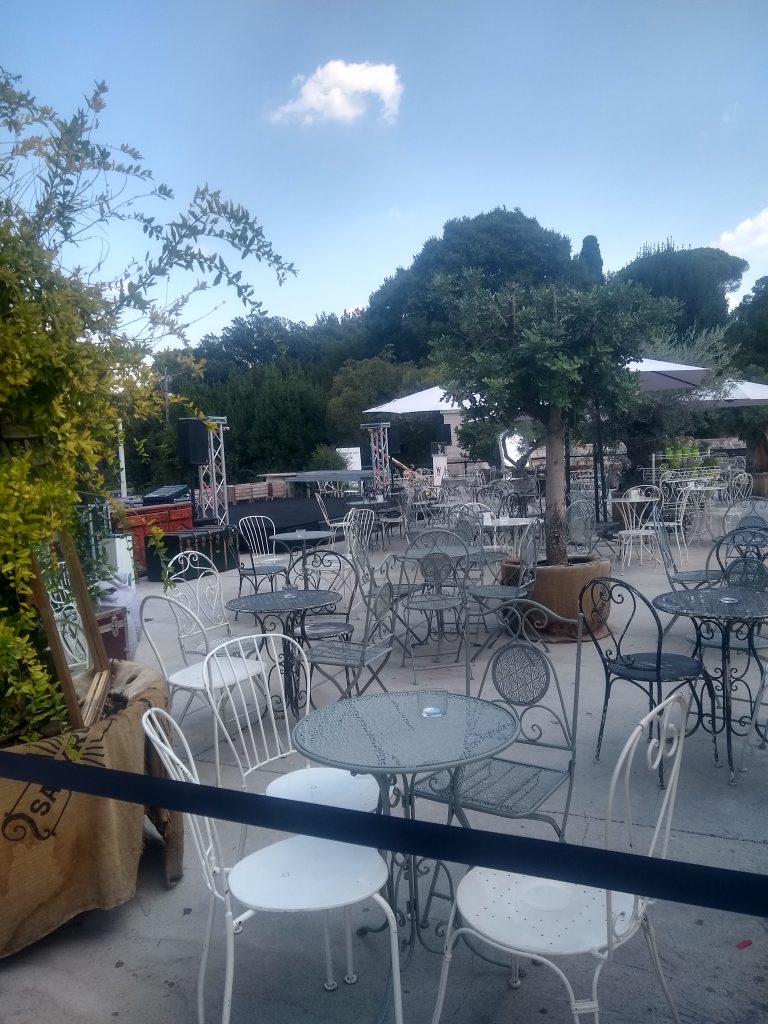 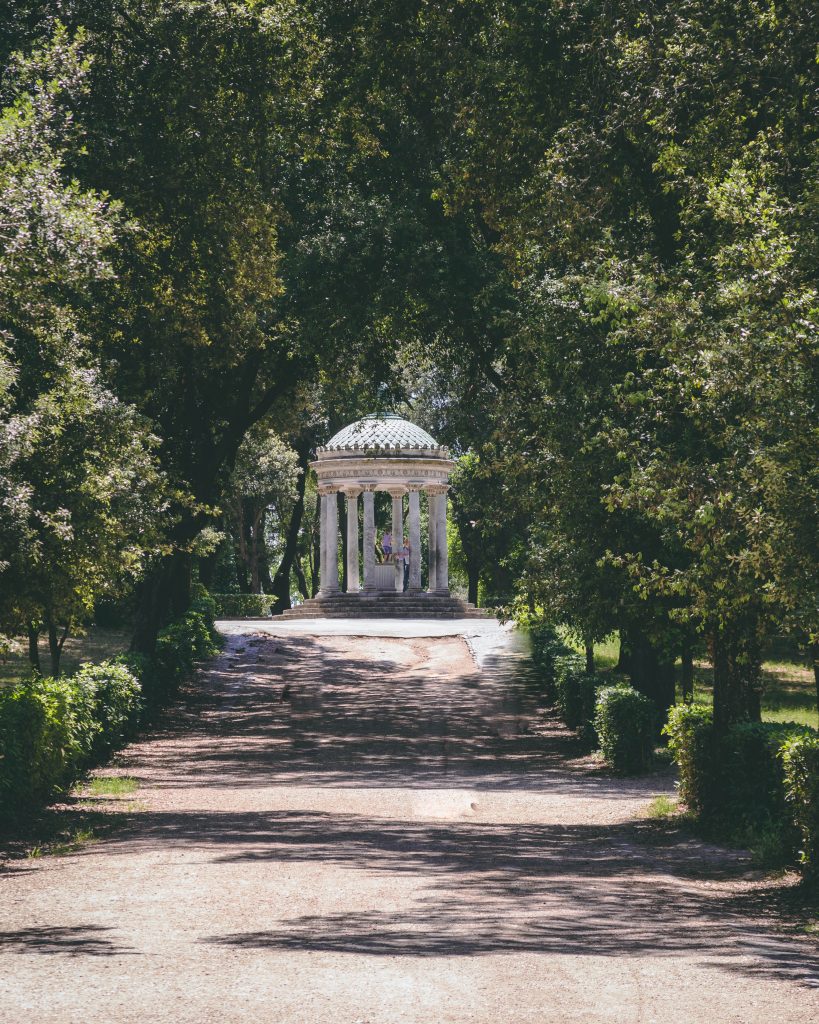 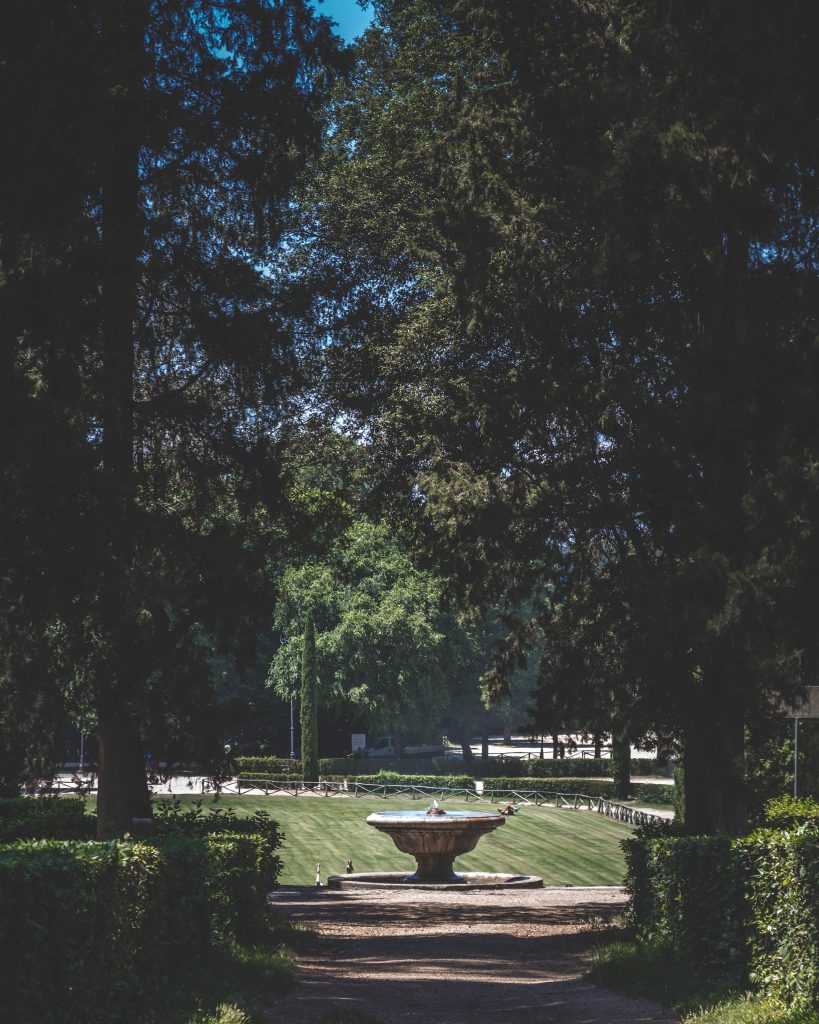 Time to walk again and enjoy Villa Borghese. We decided to hang around here for a while, as there is a lot to do, including galleries, museums, fountains, cafes, visiting bioparco (a zoo) and finally enjoying a boat ride on the lake. If you have a furry friend, make sure to take him to a dog park. From Villa Borghese you can head to different directions: Flamino then Prati, or wander around Via del Corso and Piazza di Spagna. If you want to learn more about history, stop at the Mausoleum of Augustus or for some art at Museo dell’Ara Pacis. We finished our walk in the park, as it was a hot afternoon, and Villa Borghese was the perfect place to get some shade.